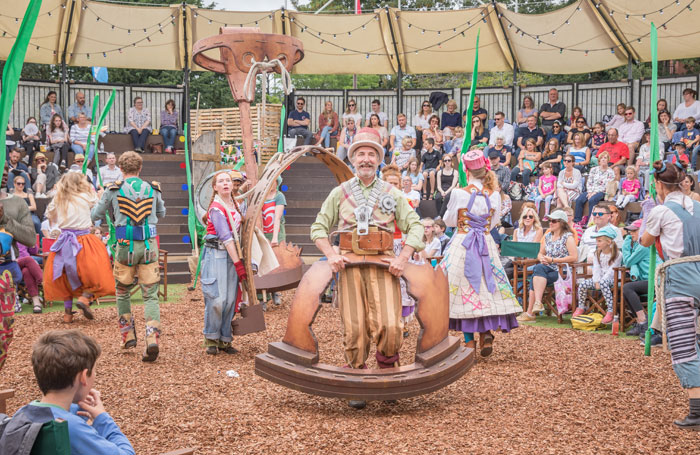 Grosvenor Open Air Theatre’s The Borrowers fully embraces the 21st century. It is truly a land of wonders with “two measures in every can”, as cheers Oliver Overmantle (Joseph Millson), climbing into a giant Marks and Spencer’s gin and tonic.

Rhys Jarman’s fantastically detailed props and costumes create a vivid world of the tiny folk who live behind the walls and hidden in the harpsichord, surviving on the things they can borrow and repurpose from “human beans”.

Ingenuity and inventiveness are also woven throughout Robert Shaw Cameron’s direction. Cling film becomes a slug’s trail while the interaction between naughty Borrower the Dreadful Spiller (a mischievous Marc Benga) and a severed mouse’s tail is worthy of David Cronenberg.

Vanessa Schofield is full of perky optimism as Arrietty the adventuress daughter of the Clock family. Her determination to join her father (Chris Wright) on foraging missions is well played out against her fussy mother – a scene-stealing turn by Lisa Howard.

By Francesca Peshier – The Stage